OFFERING IS FULLY COMITTED THANK YOU FOR YOUR INTEREST 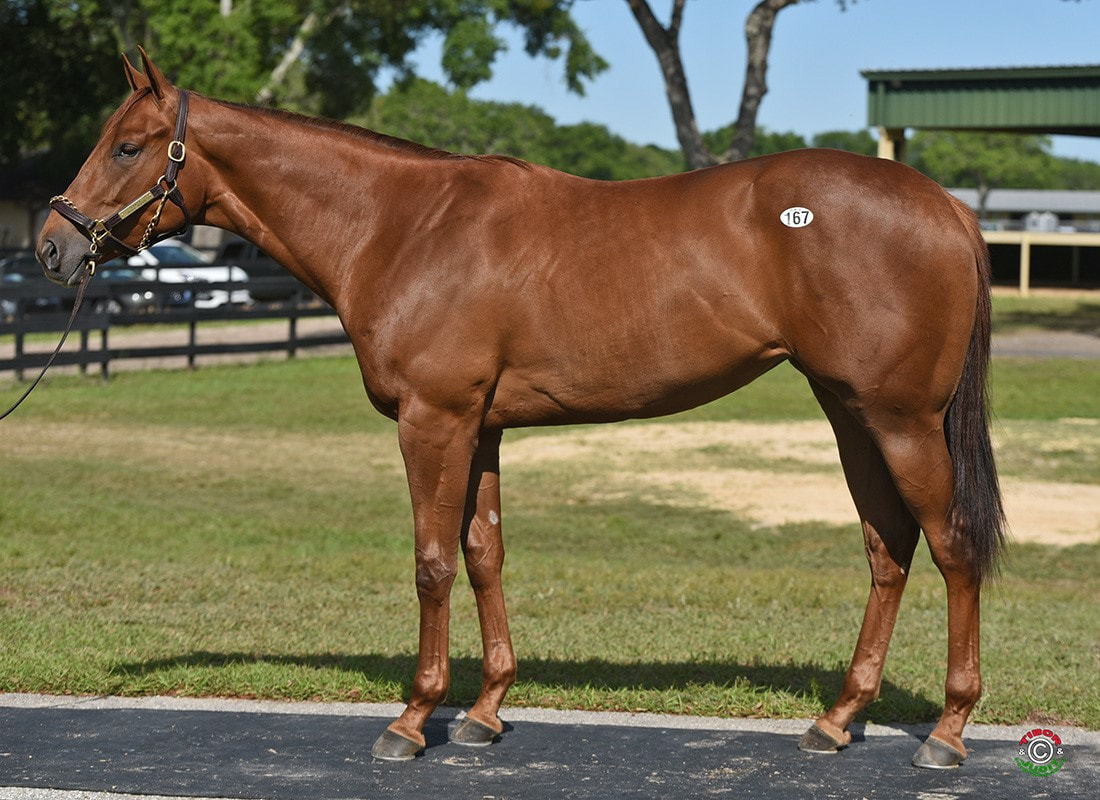 IRISH DANZING - NY Bred Filly By Danza out of Irish Ridge
The Final Furlong management team decided to send every advisor we had to scout the April OBS Sale for the stable to find the best NY Bred filly in the sale.  Bloodstock Advisor, Mike Recio, Farm Trainer, Brandon Rice, and trainer Miguel Clement all came back to us with the same filly: Hip 167, a NY Bred filly named Irish Danzing by freshmen sire Danza out of stakes placed and stakes producing mare Irish Ridge by Cactus Ridge.  Irish Danzing breezed the bullet quarter mile in 21.0 seconds on the first day of the sale’s under tack show when there was a very prevailing headwind which disturbed most horses.  Irish Danzing worked unabridged laying down an impressive 21.0 second work in workmen like fashion and galloping out 33.0 seconds for three furlongs and 47.2 seconds for four furlongs.

Irish Danzing is a brut of a filly.  She has a massive shoulder and girth with a nice long classy neck.  This filly has a perfect top line and a very strong hip for a young filly.  She is very well balanced and proportioned all around.   Irish Danzing has solid bone, sound looking feet and great pastern angles.  Based on the first two under tack sales of the season, we have found it very difficult to buy a NY Bred filly with this nice of a physical for an affordable price and we felt very fortunate to land this filly for what we deemed a fair price in today’s market.

Irish Danzing will be shipped to Brandon Rice’s Rice Horse Farm in Ocala, FL for a few weeks rest and recovery after the grueling two week long sale process.  Most fillies lose weight during the process but Irish Danzing maintained her body weight and looked to have a sound mind throughout the proceedings and we hope her class will come out this summer on the race track.  After a few weeks of rest on the farm, Irish Danzing will ship to Christophe Clement’s Saratoga string.

​Christophe Clement is a new trainer for Final Furlong and we have been looking for the right horse to send him.  Luckily, the Clement selection team loved Irish Danzing as much as we did and we were able to secure a very nice filly to start our partnership.  Clement’s record of achievement speaks for itself.  He is a perennial 20% trainer competing at the most competitive meets in America.  He has campaigned graded stakes winning millionaires such as Gio Ponti, Tonalist, Za Approval, Discreet Marq, Summer Front, Disco Partner and Lull.  He has had great success with the NY Bred program and has been looking to expand his NY Bred roster.

Irish Danzing’s sire Danza started his career off early at two winning a 5.5 furlong dirt sprint at Saratoga in July before finishing third in that year’s Grade 2 Saratoga Special.  Danza came back as a 3YO to win the Grade 1 Arkansas Derby beating the likes of Bayern, eventual Breeder’s Cup Classic winner.  Danza also finished third in the 2014 Kentucky Derby behind California Chrome.  Danza’s first foals are two year olds this year.  Irish Danzing’s mother, Irish Ridge, earned $112k with a MSW score at Churchill Downs followed by two Allowance wins at Keeneland and Turfway and two stakes placings to her credit.  Irish Danzing has already produced Irish Heroine by Street Boss, a MSW winner at Aqueduct.  Irish Heroine also finished third in the Lady Finger Stakes at two.  Irish Danzing is bred along the same cross as Irish Heroine.
​
Irish Danzing should be making her debut this summer at Saratoga given her early speed and precocity.  She is built to run fast and early so we are excited about seeing her carrying the Final Furlong Colors this summer.
​